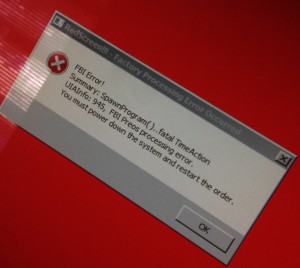 [Solved] You probably need to plug in a PS/2 keyboard and/or mouse before install.

So, a while back I had some HP Compaq 6000 Pro machines to upgrade to Windows 7 (via the included Restore disks) and the install was failing after loading the disks and initializing Windows for the first time…it would pop a Red Screen of Death with an (initially) alarming message “FBI Error!” which it turns out is merely the HP File Based Installer failing..

The solution in my case was to plug in PS/2 peripherals. If you don’t have any lying around then you may have a problem (easily solved by a trip to your local 99 cent store or Goodwill or even via Ebay).

Another thing you can try which several people swore by was disconnecting the NIC cable during install.
Also check and make sure you don’t have multiple monitors connected during install…only use the onboard VGA if possible.

Whatever you do, avoid fancy workarounds… If the install process isn’t clean like the manufacturer designed it to be then you could be setting yourself up for problems further down the road.