A new startup iPhone accessory company named Typo Products, LLC created a Bluetooth attachment for iPhones which will give users access to a Blackberry-style physical keyboard situated at the bottom of their device. Blackberry claims that the accessory is a blatant ripoff of designs used for their Blackberry-brand handhelds.

The company filed suit against Typo on January 3, 2014, claiming that rather than craft its own keyboard, “Typo chose to copy BlackBerry’s iconic keyboard design as embodied in, among others, BlackBerry’s Q10 smartphone.” Blackberry references two patents specifically:  U.S. Design Patent 685,775 and  U.S. Patent 7,629,964. In 685,775 you can see mockups of the device which show a keyboard that strongly resembles the finished Blackberry products we know so well. In 7,629,964 there is language regarding “an electronic keyboard optimized for use with the thumbs.”

On January 22nd, Blackberry filed a motion to block U.S. sales of the keyboard. 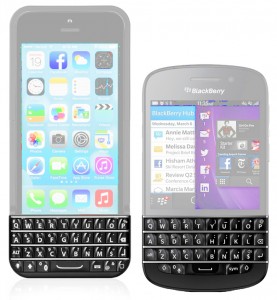 One look at the Typo iPhone Keyboard Case and you can see a very strong resemblence to Blackberry’s devices. A design which was probably intended to evoke feelings of familiarity in the former Blackberry users who almost exclusively make up the accessory’s target market.

Blackberry still has the market cornered for government, military and large enterprise. They probably see the writing on the wall as more IT departments allow BYOD (bring your own device) and as the consumer handsets get increasingly secure (Touch ID might hasten that development), but that doesn’t mean they wish to encourage these segments to easily bridge the techno-gap using a keyboard whose design so closely models Blackberry. 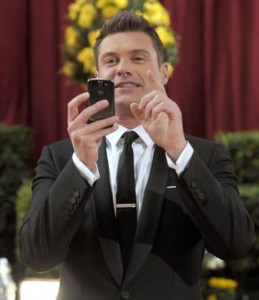 Where does Ryan Seacrest fit in?

Along with entrepreneur Laurence Hallier, Ryan Seacrest co-founded Typo Products, LLC. It’s reported by All Things D that he has invested over $1 million in getting the company off the ground. 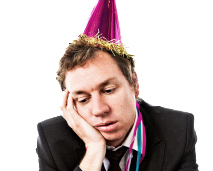 Tardy to the Party

This whole fight over phone keyboards may be for nothing if some current trends continue. Blackberry users are abandoning ship in increasing numbers, and my own experience in IT has shown me that it’s easy for users of all ages to make the switch to a touchscreen-only device. Absent a pressing business need for fast typing, those who didn’t start with and love their Blackberry phone are probably heavily disinclined to add on this keyboard case, which will increase the dimensions of their device. Much like waterproof cases, this case is another example of specialty accessories that are more annoyance than anything due to being semi-permanently attached to your handheld. I’m reminded of a friend who is a chef who swears by his waterproof case, but only because it addresses a very real need for protection when dealing with kitchen liquids on a daily basis. I myself  had the same case and I probably had it on all of a month before I got tired of the difficulty in taking my now bulkier phone out of my pocket and took the thing off in favor of a more svelte rubber case. Might I also note, I would have removed it sooner had it been easier to get off/on. The Typo doesn’t even have a “difficult removal” factor in its favor.

Then there’s the social adaptations which have taken place already. Abbreviations which were taboo in email 15 years ago (because society believed email needed to resemble a real letter) are commonplace today, even in most business settings. Typos and grammatical errors also pass through the social filter without raising red flags anymore (recipients are especially forgiving if your message ends with “Sent from my iPhone”). And that’s assuming you are crafting the email or text personally. The rise of Speech-to-Text interpretation means that in the future, most of your messages will be typed out by computer software like Siri or Google Now.

I’d also like to point out that this keyboard needs to be charged. I imagine future versions may snap-in to and extend the lightning connector, but this first model will need USB charging every 7-14 days depending on use, which, if you’re adding a keyboard to your phone in the first place, you’re probably already a heavy user, so we can safely predict a weekly charge will be in order, limiting the market for the accessory further.

I also noticed that the keyboard covers up the Apple Home button / Touch ID ring. Touch ID fingerprint recognition is probably the best fingerprint authentication you can get on a cell phone and has potential to obviate the need for most username/password access. Those users with an iPhone 5s already rely on this little ring to easily unlock their devices. Absent a redesign of the iPhone by Apple, the issue of losing quick access to Touch ID is rather significant as few will be satisfied with taking the Typo case apart every time they need to use that feature.I believe Touch ID will be absolutely essential within 3 years. 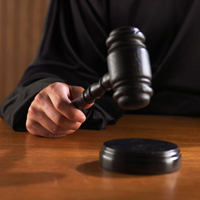 Despite the market uncertainties and downsides to the accessory, Typo Products, LLC is pushing on. They say the lawsuit is “without merit” and have vowed to “defend themselves vigorously” in court.

“BlackBerry is pleased that its motion for a preliminary injunction against Typo Products LLC was granted. This ruling will help prevent further injury to BlackBerry from Typo’s blatant theft of our patented keyboard technology,” a spokeswoman for BlackBerry said in an email.

Typo said it was disappointed and plans to appeal the decision.