As an IT guy I know how much of an enemy heat is to systems and components, but it’s still refreshing to see something new which I had previously known in theory only..  My wonderful nVidia GeForce 9500 GT video card (circa 2007) decided to overheat so badly, it melted the push pins holding the heatsink/fan to its board!  This caused the fan to drop down and commit suicide on the board below it and messed me up for a good day till I could get a replacement.

You’d think this to be a short story right? Replace fan, all is well…but no, silly me decided to go to Microcenter and instead of a replacement fan I ended up getting a really shitty replacement video card to tide me over.

Wel, “tiding me over” meant I ran this card for about a year until I remembered about it recently and decided to get a newer workhorse for my photo editing tasks.  So I did some research on video cards and their effect on Lightroom and other editing tools’ speed.  The interwebs seemed to agree that you don’t need a high end 3d card, just one with a good 2d renderer (which most modern cards should have) and a fast processor.

So I bought a replacement fan on the internet for the old nVidia card (what? I’m frugal sometimes) and being curious by nature, I wanted to know how shitty the old card was exactly…so I searched and came across a good FREE tool for benchmarking and stress testing your video card from Freestone Group. 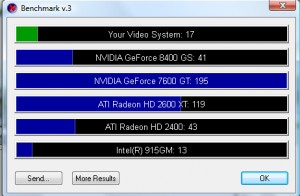 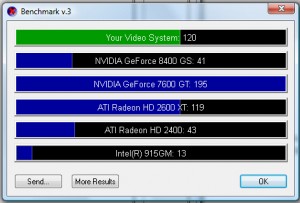