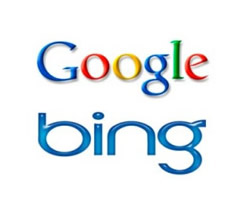 It seems that Google has become suspicious of Bing’s search results (maybe they improved recently?) so they ran a “sting” operation in which they input a random string of letters and had that search string resolve to Blackberry maker RIM’s website.  Not long after they did this, the same result could be found on Bing in less than 10% of their searches.  Google submits this as proof that Bing is copying their search results.

Call me crazy, but since when did 10% positives prove anything anywhere?  Come on Google, you’re the best in the biz and everyone wants a piece of you, but if you really had hard evidence of corporate espionage, you would have your lawyers talk to Microsoft’s lawyers and the lawsuit would be splashed across the Journal’s Marketplace frontpage instead of “Google Says Bing Cheated.”

The real story here is how Microsoft monitors people’s searches performed through Internet Explorer.  That information is probably shared voluntarily as the company asserts, but we all know how EULAs can hide pretty much anything.  But isn’t it kinda smart for Microsoft to use these searches and resulting clicks (what they refer to as “clickstream data”) to improve the results they show their users?  I bet Google Chrome has a similar feature that we haven’t heard about yet, they’d be remiss if they did not, right?

So anyway, this is a non-story.  Two web giants slinging mud and hoping something sticks.  I say go for it guys…this kind of competition is good for the end users.  Play On!

Add your IP address to the DNSWL (Whitelist)