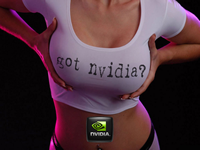 I fixed a computer for a guy the other day (which I almost never do anymore for liability reasons) but he told me that it was completely hosed so I didn’t feel bad taking a wack at it.

From what I could tell, the computer was just fine and I was able to reinstall the OS using the System Restore disks that had come with the system (Acer Veriton VT6800).  After that it got a little annoying.  I kept installing the video drivers for his eVGA NVidia geForce 8600 GT (Model# 512-P2-N756-tr) click here for more info about this card and the system would reboot and then once windows loaded it would go into suspend mode and then out of suspend, in and out and I would have to reboot via Safe Mode and remove the display adapter drivers in order to get it to stop.

After some troubleshooting, I realized that I had neglected to load the integrated VGA adapter’s drivers before installing the add-on card (doh!) and they were obviously fighting for resources causing this odd error.

So if you run into this problem yourself where it’s an NVidia card and the motherboard has integrated video, make sure you load ALL of the drivers from the manufacturer’s website before you install any add-ons or you might get some strange behavior from your system.