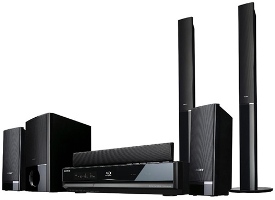 Tried to update a Sony Blu-ray home theatre system to ver.009(10-7-2010) and it didn’t like any of the burned CDs or DVD’s I used.  It kept saying “Cannot read disc” or didn’t recognize it in general and so I was forced to figure out another way.

– The easiest solution to this issue is to get an ethernet cable and string it across to your network switch.  Chances are your blu-ray is setup to use DHCP and after you restart it the device should pickup your network configuration and be able to get to the internet for the update no problem.

– If the blu-ray player has built-in Wireless then a more long-term solution would be to configure it to your network (assuming you have wireless, but who doesn’t these days).  This is always a good idea because some blu-ray discs come with enhanced content which you can access through the internet and of course all of the future firmware updates are automatically available to you if you maintain an internet connection.

** But suppose you don’t have wireless on the blu-ray or a long enough cable, but you do have a media center PC or laptop that you could connect to the blu-ray and it’s on a wireless network?  Then you could use my instructions here and configure that Local Network ethernet port to be a bridged connection to your wireless.