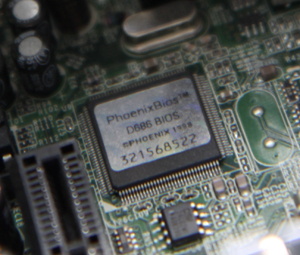 This system wasn’t booting and had a beep code, so naturally I checked the memory first (open the box, pop off the front, lift the lever to pop out the media bay, unscrew the dvd drive, disconnect its cables and press the metal clip holding the dvd drive in on its right side while you slide the drive out. you can now access the memory).  After a little swapping I was convinced that either both chips were bad (unlikely) or they weren’t the problem.  So I listened to the code again and realized it was this one:

For a list of Phoenix beep codes and HP/Compaq codes in general, go HERE.

Anyway, at boot I selected Option F9 to go into diagnostics.  Upon entering the diag screen, it threw this error:

“Default BIOS settings have been loaded due to BIOS or checksum issue, Press F1 to enter settings or allow the PC to continue”

The diagnostics completed sucessfully, and the system started booting to Windows again, but now has the error above on boot.

I went to HP’s page and downloaded a Bios update for the Irvine MB that I have (ver.5.23) and loaded that, but the error persists.  I had a feeling it would…moving on…

AMS360 – It is impossible to work with this document